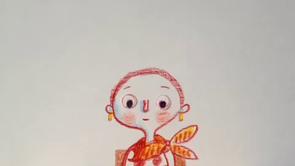 Still drawing — This weekend I spent a little time playing with the new Vine.co app. It really is a neat little thing to tack on to a twitter account. I will attempt to not over-use it… but in the mean time here is yesterday’s drawing, a raw little stop motion animation called “Mad Hair Day”. I used one sheet of paper and added to the same drawing with each frame. The eyes are two circles from a hole punch sitting on top of the paper, which could be moved around with finger tip. You can’t get too much simpler than that.