Saturday morning Van dropped by to pick me up so that we could venture out into the even further out suburbs to visit a miniatures show in community hall. Van and I are both drawn to all objects cute and tiny. Van cleverly incorporates such things into her artworks while I just enjoy the wonder of these tiny little doll house creations. That being said, what a weird experience this miniatures show was. I was expecting it to be full of young girls snapping up bargains for their doll houses but instead it was absolutely busting at the seams with older women all proudly sporting miniature association club badges, either selling their wares (mostly beautifully handmade) or traveling around the extraordinarily warm rooms of the community centre in packs heatedly discussing the displays. 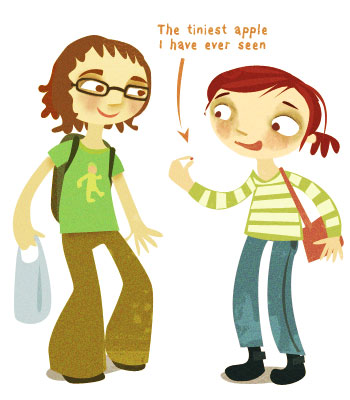 I was standing looking at a relatively clunky, amateurish kind of scene set up in a wooden box when a group of these women came bustling up and literally pushed me aside with exclamations of “Oooh yes! I have been wanting to see this one! What do you think girls?” followed by surprisingly catty comments. As soon as I realised that Van and I had stumbled upon one of those micro-scenes full of competitions and social / creative hierarchies I became more and more aware of stuff going on in the room around us. Under the pleasantries and coiffured hairstyles I noticed little knots of women having those kind of conversations where heads are bowed together, lips hardly move but eyes are wide and greedy and laughter is loud and nasty.

I heard such things as “Oh, did you see what so and so has done? Been there done that! They say that imitation is the best form of flattery!” and “Ohhh yes, I will be at that convention. I hope so and so won’t be there.”

I couldn’t help but wander around the place in a state of amused horror. But some of the little things on display and for sale were incredible. There were a few women who were selling tiny dollhouse sized knitted garments. I have seen a lot of miniature knitting on the web but to actually hold a perfect little cardigan or fairaisle sweater in my palm and marvel and the detail and handiwork was something else.

Saturday night Big-P and I caught an early session of Harry Potter and the Prisoner of Azkaban and I loved it. It was so much better and cooler than either of the previous ones. I see that the next one has gone into production and that the cast is still pretty much the same. I can’t imagine anyone else playing Ron or Hermione – Harry maybe – but not those two.

Speaking of Harry Potter – the wonderful illustrator Mary GrandPre, who does the cover illustrations for the US editions of Harry Potter, has an just opened an exhibition in Cincinnati called The Art of Storytelling.