We’re back from holidays and I feel like I need to rush off and book another holiday as soon as possible to recover. It was exhausting. Amelia’s croup turned into a nasty, nasty cold and then a chest infection with a touch of conjunctivitis so we were back at the Mildura Base Hospital Emergency department again on Monday morning. After that it was passed on to the rest of the extended family and at all times there were various folks sniffling, coughing and gargling with sore throat mixture all around us.
Despite all this, we did get to see a balloon mass launch from the field one afternoon which was pretty spectacular and pretty exciting due to a relatively brisk wind. I have borrowed a photo that Big-P took to show you how amazing the sky looked (here).

I finally got some time to knit and managed to get two kittyville hats done. One was a trial run done in the ever trusty Bendigo Woolen Mills Rustic (below), while the other was an experiment using a yarn from Marta’s which worked really well. It’s bumpy and lumpy but lovely and silky all at the same time. Here is the one in rustic, which was following the adult size pattern but still manages to fit on Amelia fine. She had just won these glasses from the sideshow – with a little help from Grandpa: 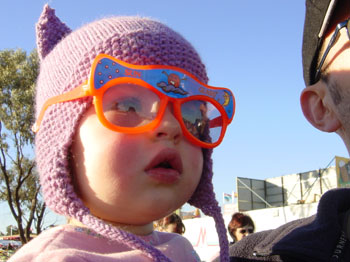 Photos of the one in Marta’s yarn to come. And because holidays mean hundreds of photos, I will share a few…

Here is a photo I managed to take while Amelia and little cousin James were helping put the balloon away: 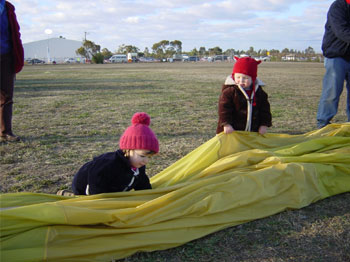 And earlier, Big-P and Amelia hit the sand slopes: 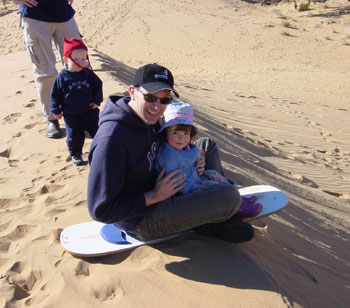 Two fine Kittyville hats, one by me (left) and one by little cousin James’ mum, Kath (right):