Blogger Idol – Week One – The 80s – I am not a big fan of following blog memes on the whole, but I thought this one might be a fun way of doing some illustrations I wouldn’t otherwise think to do based on a random theme.
So here is my thing about the 80s. Most of the great fashion crimes of my life occurred in the 80s and here are just a few: 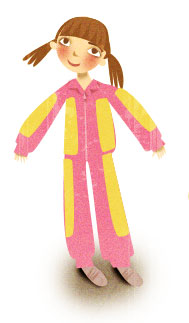 The pink and banana yellow track-suit – Casual clothes day, Grade 6 – 1982. This was a hideous tracksuit which I had received as a gift from some misguided relative. I had recently moved from Adelaide to Melbourne and wore this to my first casual clothes day at my new private girls school. Up until this point I had absolutely no idea that the clothes you wore were at all important. Needless to say, I was teased mercilessly all day. 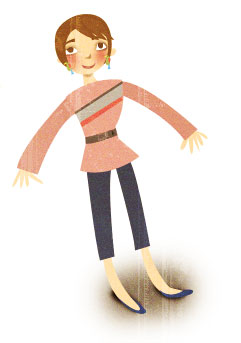 Baggy windcheater with belt, three quarter jeans with zips, court shoes, and big carved wooden parrot earrings. c1985. Need I say more? I thought I was really cool. I can clearly remember the kids across the road laughing at me. 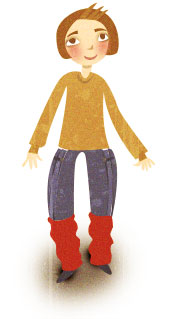 Bright red leg warmers over ‘designer’ jeans c 1983. Designer jeans were made up of many, many panels of denim layered with seams and buckles. I had to squeeze my huge red leg warmers (a must for any post-Flashdance girl) over the top of them and the added effect made my legs look elephant like. This was my favourite outfit for going roller skating down the footpath out the front of our house.

Nouveau Hippy c1986; At some point around 1986 or 7 I started going to peace rallies and out to see all-age rock shows (TISM! Crowded House! et al) and I decided it was extremely cool to traipse around the city in bare feet. None of my friends thought any of these pastimes were a good idea let alone cool so I did most of this stuff on my own. I found my Great Uncle Warren’s old beaten up farm hat (“Uncle Wazza’s Hat”‘) on top of a wardrobe and thought that it was amazing and unique enough to become my signature accessory. 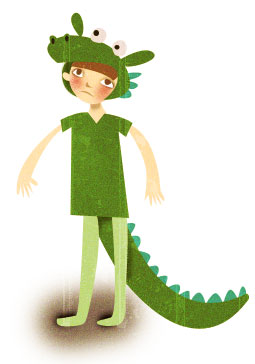 The dragon costume from St George and the Dragon neighbourhood play c1984. This was a pretty neat costume if I don’t say so myself. The head took me ages to make out of papier maché – it had ping pong balls for eyes and was sprayed with green metallic paint. The t-shirt was made out of a bright green satiny kind of fabric as was the tail which was huge and stuffed and sat around my waist on a thick band of elastic. I wore green nail polish and lurid green stockings to complete the effect. Our family photo albums are filled with great dragon / knight conflict scenes, the princess singing solos, the town crier reading proclamations… and my underpants. The afore mentioned satiny t-shirt insisted on nudging its way up to the wide elastic band in most of the dramatic scenes (I did my own stunts) to reveal dark underpants under lurid green stockings. Not a great look even in the 80s.