It occurred to me while I was cleaning the bathtub this morning that I am quite obsessed with Australian Idol. Through a fog of toxic cleaning fumes and thoughts of how incredibly gorgeous Chanel is and which route would be best for her her career – to win or not to win and exactly how I could get my hair to do what hers does I vaguely realised that Big-P was saying good bye to me as he headed off to work. 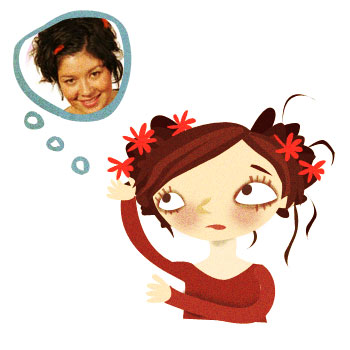 I briefly stopped thinking about the competition but then a while later I found myself thinking about the argument between two of the judges last night, Dicko and Marcia, and whether or not they do it for ratings or if it’s all real.

Only a little while later I found myself again lost in thoughts about how terrible Casey must feel today after forgetting her words and receiving a slamming from the judges. She’s only 16! And so on.

Idol is eating a huge hole in my personal “say no to tv” campaign. There’s Sunday night’s performance show, Monday night’s live verdict and now I even have to watch Inside Idol on Thursdays as it seems very important to me to know what these people are really like… It’s all got so bad that I have twice now stopped at the magazine rack at the Supermarket to read up on the Idol celebrity gossip – who likes who, who’s a complete cow, latest Idol health scare and so on – while Amelia is shouting at me from the trolley “Me want that Wiggles thing Mummy!” pointing to any near-by product branded with the Wiggles’ faces. At least I don’t have it as bad as she does for the Wiggles. I am yet to change my name to Chanel as she has to Jeff.