I am not a big fan of cats. The problem is that I really wish I could be as I really like the idea of cats. I think they are beautiful and independent and serene and generally very cool but I have two problems. The first is a pretty common, fairly boring allergy problem. The second is a far more complex, deeply rooted thing which I call the Edward Complex.
A long time ago… when I was thirteen, I was allowed to choose a pet cat. We had already had one other little kitten for a short time before she was hit by a car. We were devastated when we lost little Jenny so a new cat was always going to be a logical addition to our household. So as I mentioned, I was allowed to choose this new cat which means I have no one else to blame but myself. On a Saturday afternoon my Mum and I went around to a neighbour’s house to choose a kitten from a small litter of kittens that their gorgeous cat had just had. All her black and white kittens were curled up and sleeping when we were shown into the room, with the exception of one little fellow who was swinging wildly from the curtains. I loved him instantly – what flair! What joi de vivre! And he had a cute little white patch on his nose. 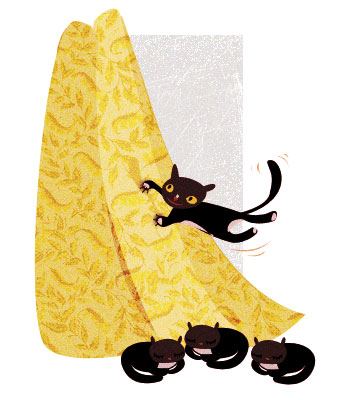 Six weeks later we picked him up, called him Edward and brought him home and life was never the same. As time wore on the little white patch on his nose faded away and his joi de vivre turned out to be aggressive, overly energetic bad tom-cat brain wiring. He literally terrorised us (and particularly me) every (every!) day for years and years. He grew larger and larger, cost a fortune in vet bills due to fights he would pick with all the other neighbourhood cats and as his 15 years wore on he got a little slower but he would never would turn down an opportunity to bite an unsuspecting hand, claw his way up the back of the couch and wrap himself around a head with flailing claws and snapping jaws or pounce on any passer by from any one of dozens of hiding places. 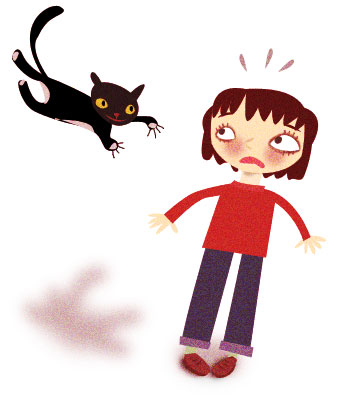 You either loved him or hated him and I am sad to say that I fell into the latter category. I didn’t like him. I don’t miss him and thanks to the memory of his razor sharp claws and the sound of snuffling and chomping in my hair I am now afraid of all cats. I will stop and say hello to a cute cat on the street – from a distance. I will admire cute kitty photos and I will always be excited when a friend gets a new cat. In fact, one of the two main characters in the book I am writing is based on one such cat – Nic and Jud’s beautiful Slither Diddle. Nonetheless, unfortunately I find it totally impossible to relax in a room where five adults are watching the first episode of Survivor Vanuatu and there is a cat (this very same cat – the elegant Slither Diddle) – on the loose – who is being stirred into a frenzy by my thoughtless husband and who insists (as cats do when they sense fear) on sniffing me and exploring my lap. I recognise those big black excited pupils. I recognise that whiskers-forward, head jutting look… I know what will follow! I’m sorry Slither, our relationship is going to have to be purely literary.