Thank you for all the comments from the last post and all the awesome suggestions for t-shirt suppliers. I have found a supplier of American Apparel here locally in Richmond and will also investigate ordering online as well as the other suggestions made.
It’s been a busy few days. Everyone is still sick or sick again so sleep has been hard to come by and days are long and filled with Wiggles videos. We have had a great weekend despite all this with yum cha at the Shark Fin House in the city (Amelia was much entertained by the waiters whizzing by with trolleys filled with dumplings, the tables of noisy people, the tanks of fish and her set of chopsticks – a great toddler success story) and then a delicious birthday dinner for Ben at Kenzan in the city last night. This morning I got up early and hopped down to the flea market to meet up with Kylie and Miriam which was delightfully enhanced by a chance meeting with Ms Cassandra. There was coffee swilling and much excited talk of t-shirt printing, good and dodgy printers, yarn tales and market finds. An inspiring morning indeed.

I have also had a chance to sew up two dogs from “Splendid Soft Toys”. (it’s a little hard to see the black dog in this picture. His corduroy coat seems to suck in the light). 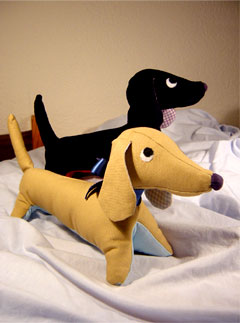 I discovered it really wasn’t too hard to do so I have sketched an idea for a dog design of my own ready for turning into a pattern.

And there’s also those cat dolls to be worked on. And my Blythe doll arrived and she really needs some new clothes. I am about to sew her up a new outfit consisting of this and this.

What else…. It’s no secret that I love Martha Stewart Kids Magazine. I could give or take Martha Stewart Living as it’s pretty expensive to buy here and tends to get a little repetitive, but Martha Stewart Kids on the other hand is always full of fresh ideas, great colours, wonderful design (polka dots abound! Ric-rac is the star of the day!) and even stuff that I book mark to try with Amelia in the future.

Over at Fred Flare Kids’ Editorial Director Jodi Levine is interviewed. Other interviews I like from the Fred Flare line up include Bust’s Editor-in-chief and Stitch ‘n Bitch author Debbie Stoller and local lass and designer extraordinaire Beci Orpin. Beci says nice things about Melbourne.