Today is a beautiful (beautiful! listen to those birds! enjoy that sunshine!) day. Amelia J slept all night until 5.30am when Big-P did some of his gentle cajoling and got her back to sleep until 7. I call him the Baby Whisperer. Last night I clanked to bed wearing my full Toddler Body Armour, ready to dig in and sit out the midnight fury but we all just slept and slept and slept. Of course, from experience we know we can’t be too smug and too comfortable as it could have just been one of those freak occurrences while the troops regroup, but it has made such a huge difference to my mood.
I am so cheerful that I can happily report on yesterday’s culinary experiences. Yesterday I was so thrown that I didn’t even mention it.

While in a kind of sleep deprived stupor, I decided we all needed some good old fashioned comfort food and I set out to make Chicken Soup with Rice from a book called Jewish Italian Cooking by Mira Sacerdoti (Hill of Content, 1992). How more comforting can you get than Jewish Italian chicken soup with rice?? So I bought a whole chicken to put in a pot and gently simmer until it was nice and tender. The chicken was too huge for the pot so Mum and I decided that we would just chop it up and put the pieces in to bubble away. Things were going well – I skimmed the surface until it was clear, added the rice until it was soft and then added the vegetables to give it delicious flavour. Then I left it to cook away. I returned a while later (I don’t know how long it was, three quarters of an hour? An hour? Two?) to find a disgusting thick grey-white sludge with dark bones, both large and tiny, gristly and sharp floating around in it. It was like something the Triplets would cook up in The Triplets of Belleville if their thing was chicken and not frogs. 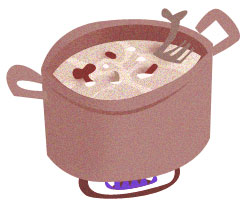 Not to be beaten and thinking of the utter waste if I ditched it at this stage, I hauled out what chicken I could from the thick mess and moved to the next stage of “put the rice with the chicken pieces and a little broth through a sieve or puree in the food processor”. The rice had melded into the general mire so there was no “putting with” possible, but I pulled out as many of the little tiny deadly bones as I could and hit blend and, after a little crunching of the missed bones, a thick white paste rolled around in the processor. I decided to take the huge amount that was left in the pot and put it through a sieve so I could at least save the little broth there was. I mixed the white paste back in with this broth and felt utterly disgusted.

After commenting quite rightly that it looked like glue, Mum sipped a little from a spoon and said it tasted like thick, intense, pureed chicken. Hardly a surprise. I tasted it and tried not to gag. You know how (if you are not a vegetarian) your mouth can become kind of dry when eating a little bit of chicken breast? Think a whole soup that does that. Ughhhh… full body shivers of repulsion.

It is now sitting in a jar in the fridge and I can’t even bear to look at it. Perhaps we can use it as some kind of base for a chicken sweet corn soup or maybe add some… ew… something… I don’t know. I can’t even contemplate it. I’m not that cheerful.