After finishing off the illustration yesterday I packed up a freshly snoozed and slightly dazed Amelia into the car and dashed off to a playground to meet up with Suzette and the kids. Suzette was still feeling pretty shaken from her awful morning and after hearing more of the details I started to feel that weird panicky paranoia I sometimes get where I just want to grab Amelia and hold her as close to me as possible and never let anything happen to her EVER. But here I was in a playground watching her totter (and she really does still totter – that’s not just me being paranoid) madly about desperately trying to keep up with Oskar who tears (and boy does he tear!) around the place with all that amazing confidence of a three year old. She would stagger wildly up steep ramps, perch absentmindedly at the top of slippery-slides, and teeter precariously on high platforms with big gaps in the railings where she could easily take a clumsy step backwards and aaargh! eee! ooooh…. So you can clearly see what kind of mood I was in. This resulted in me running around after her, scrambling through tiny tunnels and leaping towards her ready to grab her chubby arm at any moment.
Oskar ignored her for a while despite her insistence on following him around but then, while the three of us sat at the top of a steep (really bloody steep and windy and crazy – oh yes) looking slide, he became intrigued to see if he could entice her down with him – much to my chagrin. “Melia wanna slide with Oskar?” He asked hopefully and luckily (for my nerves) she said “NO!” which he graciously accepted.

For a little while after this they booted around together and Oskar was patient enough to answer all of Amelia’s “Was that?”s and finally, the next time he asked “Melia wanna slide with Oskar?” she shouted “YEAH!” and before I could stop her they started off down the slide together. At the last moment I grabbed her and at least made sure she was going down on her tummy (so she would avoid slipping backwards and bumping her rather large head as she has done before) and for some reason I just couldn’t let go. Oskar was hanging on to her legs and I had her arms and she was slowly descending down the slide and I still couldn’t let go.

My obvious anxiety attracted the attention of a kind grandpa who was playing with his grandson nearby and he came rushing over to save them from I’m not sure what and Suze and Jasmine were down at the bottom looking up at us too… and I realised the complete disproportionate drama I was creating but I still couldn’t let go. And finally it was Amelia’s expression looking up at me – that of complete ease and complete joy to be going down the slide with Oskar -that let me let her go. I could tell she was a bit puzzled as to what my fussing was about and was thinking that perhaps it was part of the game but there was no fear there at all (of course) so I just let go of her tiny little hands. Within two seconds they were at the bottom of the slide completely fine and laughing (of course). 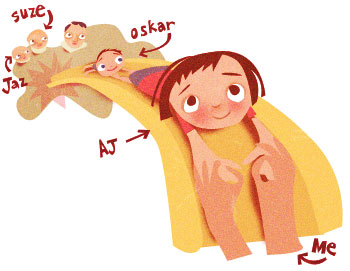 I remember once reading something somewhere – and I really wish I could remember where – that said that being a parent was all about letting go, right from the very beginning. And I know this, and I believe it with my whole heart but boy it’s a tough one!