Lovely long weekend. Not much on but here’s a long entry none the less.
Amelia has a friend called Lauren who likes to pull Amelia’s hair and push her over. I should clarify very quickly that Lauren is an adorable little girl despite this and the daughter of one of my best friends who has been visiting from the UK for the last few months. The girls are only a week apart in age and are both about the same height and sport the same amount of tub. They actually seem to get on very well together and toddle about sharing toddler wonders but occasionally Lauren can’t resist the temptation to do something to Amelia that will inevitably incite some kind of exciting adult reaction. Amelia starts to howl immediately regardless of what it is that Lauren has done – even if it’s just that she has been bonked on the head with a soft, squishy currant bun (so very hard not to laugh at these times). Amelia gets cuddles and Lauren looks very, very naughty and then gets a firm talking to. I can’t quite get the expression right… but it’s a kind of a defiant glare that says “so what are you going to do about it?” combined with a wide eyed innocent “I haven’t done anything!”. 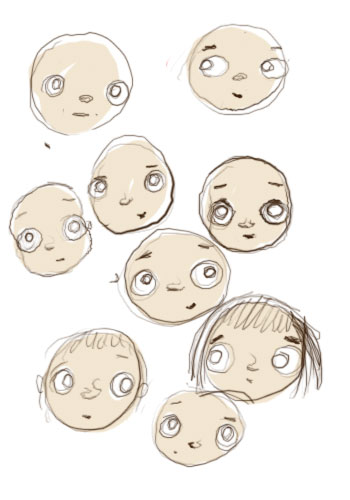 On Saturday evening, after Lauren and Amelia had spent an hour or so together (an hour of many tears and many “NO! You must not do that!”s), I saw an unmistakable glimmer in Amelia’s eye as she watched Big-P and threw a piece of tofu across the room. After she was told not to, she did it again and again with more gusto until there was none left, and then she kept pretending to do it with some imaginary tofu, all the while glaring at Big-P with this set glare. There was that same evil glimmer. It was Lauren’s exact expression!

Yesterday I went out to Spotlight with my mum to buy a stack of stuff ready for a mountain of projects I have coming up. There are a couple of fast approaching birthdays that need looking after as part of my “year of the homemade gift” and as Amelia is on a dairy free diet for the next three months (to help eliminate some eczema – poor lovey) I started thinking about an alternative treat for Easter. I decided that a toy rabbit would be kind of cute (some how a toy bilby just doesn’t appeal to me as much) so I thought I could either try knitting one (how is this or this for cute?!) from a couple of Debbie Bliss books or alternatively as I would have to buy the books and probably easier for me at this stage is to make a little doll out of fabric. So far all of my toys have been made out of synthetic felt which is great to work with but I wanted something that would be a bit more durable. Those tiny little felt guys that I made for Amelia just before she was born have been loved a little and have ended up filthy and terribly pilled. Inspired by the Ugly Dolls I have bought a couple of metres of a teddy bear coloured polar fleece which is now washed and ready for me to start hacking into it with total abandon… or maybe this time I will draw up a pattern. I think it might have to don a tiny knitted scarf.

While I was out at Spotlight I ran across an old arch nemesis. I used to have to work with this guy who I will call Mr Shouty as that’s what he would do. He couldn’t just explain something or request something, he would start an argument for the sake of it. He would roll his eyes and slap his forehead and call me and anyone else an idiot or worse. He was a rude, rude bastard who I often had the unfortunate luck of having to catch the train home with. On one of these occasions we were making small talk about the company and I declared that I really like the management team and loved our CEO (but I did not mean that I loved him passionately and romantically, my tone definitely would have indicated respect and admiration as you would say “Oh I Love Sophia Coppola” or “Oh I really love the Moomintrolls”). Our CEO’s first name was Hugh and as the train rattled and rolled noisily along I shouted “And I love Hugh!”. Mr Shouty looked startled and shouted “WHAT?” and I repeated several times as he continued to look alarmed “I LOVE HUGH!” — only to realise just as I was getting off the train and joining the throng of peak hour passengers hurrying up the platform that he had thought I was shouting “I LOVE YOU”. After he left the company in dubious circumstances several weeks later my coworkers were kind enough to decorate my computer and desktop with Mr Shouty’s old business cards. And there he was standing in spotlight slapping his forehead and shouting at his co-shopper about some blue fabric. Needless to say I hid behind my mum and my huge roll of teddy bear coloured polar fleece.