Mum has a stack of her old engagement calendars piled up beside her bed which Amelia likes to look through every morning before breakfast. Most of them are calendars that Pomegranate Calendars and Books put out in the 1990s called “Dreams of Childhood – Illustrations from Children’s Literature”. Each week is accompanied by a plate from one of the 300,000 children’s books kept by the United States’ Library of Congress mostly dating from early to middle last century. Inside I have discovered many delights including Kay Nielsen, Edmund Dulac, Feodor Rojankovsky, Lois Lenski as well as some samples of old favourites such as Jessie Wilcox Smith and Arthur Rackham.
Who’s taken my skipper sardines?

While I was on the web trail hunting down some images for the above links, I found this great site of Women Children’s Book Illustrators. Lots of good stuff to go through.

And here’s what Amelia J did today; painting! 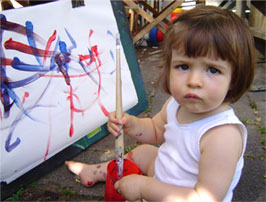 27 Responses to “Dreams of Childhood”