It was a good weekend all round. Friday night we were at the Moonlight Cinema for School of Rock with Mac, Mish and Kim. We took our rugs, cushions, sleeping bags and doonas, hired a couple of beanbags and tucked in under the stars and the bats and the mosquitoes for some laughs. A few spots of rain heralded the arrival of a huge down pour which waited until the climatic Battle of the Bands scene to open up on our heads. Like a true Melbourne audience hardly anyone at all got up to flee from the rain. Most stayed on and huddled up against the elements encouraged, no doubt, by the theme of youthful rebellion and the “Stick it to the man” message (YEahhh! Stick it to the rain!). 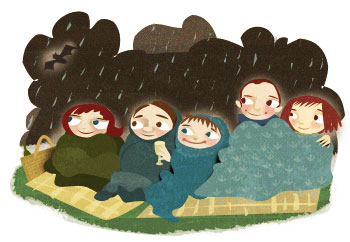 Big-P was smart enough to leap up and wrap the doona in the rubber coated picnic blanket, leaving us bunched up on our hired bean bags with rain trickling down the back of our necks and pants to watch the final scenes. It was the best fun I’ve had in ages.

Saturday morning saw a successful trip to IKEA to pick up a small green table and a couple of baby chairs for Amelia J – now she can sit up at her table and use her crayons and is very impressed with this addition to her sprawling empire.

Sunday morning we joined Ben and Suzette to sample some of Ben’s award winning Panatone. Mmm. Delicious slabs were consumed.

And in other news Loobylu has taken out three inaugural Australian Blog Awards — Best Victorian Blog, Best Designed Australian Blog and Best Overall Australian Blog. Thank you to the people who nominated and voted and to Vlado who organised the whole thing all at the same time as having a new baby. Be sure to check out the nomination list for some great Australian stuff.