After watching Jamie’s Kitchen last night, and witnessing his students blunder through the supposedly simple exercise of cutting up leeks, I thought I should tell you about my leek cooking disaster over the weekend.
We had invited Ben and Suzette and the kids over for lunch and as it was a cold and wintry day I decided to make some lovely hot soup to serve with crusty fresh bread and a glass of wine. Last week Mum and Dad’s friend Shirley had brought over a bowl of leek and potato soup for us for dinner and it was so good. Just the perfect blend of flavours. I had grilled her over the recipe and she told me that it was as simple as bunging together some leeks, potatoes and water and voila. When cooking something new I tend to get a bit neurotic about following a recipe and bunging things together is not something I have quite got the hang of yet I decided to go to Stephanie’s bible and follow her sage wisdom. Sure enough it was basically leeks and potatoes and water with a sprinkle of parsley and chives to garnish (wot? no stock??). I went down to the Market early Saturday morning with Mum and bought a tonne of leeks, the potatoes, some parsley (I had seen chives in pots on mum’s patio if I needed them) and some other bits and pieces to nibble on from Nick and Sue’s (who make the most amazing dolmades) and rushed back to delegate leek chopping to Big-P while I rushed around trying to carefully wash out the leek grit, peel spuds and fling things in the huge saucepan. It was just like something out of Jamie’s Kitchen. Leek tops and peelings everywhere.

Soon everything was bubbling comfortably on the stove. It smelt ok. Kind of like leeks if you can believe it.

The gang arrived as the potatoes began to soften and all was going to plan — until I tasted it. And oh dear, absolutely no taste at all. So the soup looked like snot and tasted like nothing. Bon appetie mes amies! Never fear… I followed Stephanie’s instructions to season well and by the time I let Suzette taste a little for her advice my salt grinding arm was seizing up with RSI. “Needs more salt” said Suzette. So more salt I gave it. And when in doubt, garnish! So I had already chopped up the parsley ready to sprinkle, but I decided that I should also duck out the back door and grab the chives. What sweet little things, dancing merrily in their pots, blowing softly in the wind. I snipped a handful and went back to chop them up . Except they didn’t really smell like chives but I figured that perhaps because I’d been cooking with potent leeks all morning I was just unable to smell the oniony-ness of the chives.

LUCKILY I mentioned this to Big-P as I washed my hands and asked him to try them. I was out of the kitchen at the time and he took a big pinch and gobbled them down. “no, they don’t taste like chives” he called to me. So Suzette had a little (LUCKILY) nibble and agreed with a definite “they are not chives”.

So we forwent the chives. And the soup was very, very dull indeed. The faux-chives – which turned out to be petticoat daffodils – would have been an improvement. Thank goodness there’s was Ben’s apple pie to follow. Mmm. Good pastry.

But while I have learnt a lot from Jamie Oliver and his books and TV shows over the last few years, I learnt two things on Saturday from Chez Robbo – anything tastes ok after a couple of glasses of wine at lunchtime (even Snot Soup with Petticoat Daffodils) and when Stephanie says “season well” – she really means it.

P.S.
Here for the photographic evidence of why I was quite sure they were chives: 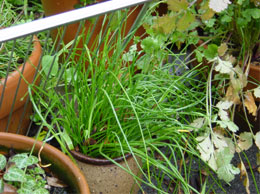 See?? Plus they are nestled in amongst the pots of parsley and coriander!